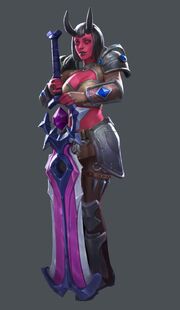 Art for the Fighter.

Abilities of the Fighter are mainly focused around melee combat, increase damage resistance and allow the player to quickly move around in a fight. Fighters are the core of any team, being the classic melee fighters. Additional abilities of this path allow you to use vampirism, stun opponents and more.

Leveling up the Fighter[edit | edit source]

See more about mechanics in the article: Callings

Abilities with the higher level replace their weaker counterparts.

Unlocked Abilities: Slash I (weaker version of the Insatiable Strike), Light Sword (passive; summoned if the Fighter doesn't have a weapon)

Low levels of Calling do not affect the appearance of characters

Fifth level will change the appearance of Fighters - skin as well as pupils of the character turn red and demonic horns appear on the forehead.

Since all the Fighter's damaging abilities are strictly melee - the best tactics for them would include constant movement and accumulation of the Foretaste Charge, which allows to deal colossal damage with the Sacrificial Ritual.