Architect's abilities quickly change the terrain, changing the tactical situation on the battlefield. With skillful use, in a battle such abilities can give a great advantage to the allies. 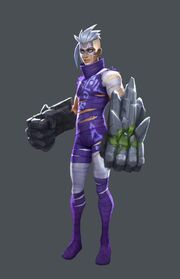 Art for the Architect.

Architect has two states - you can toggle between them by using the "Stone Hands" ability. Each state has has its own set of abilities, one - more oriented towards support, other is more about melee combat.

Leveling up the Architect[edit | edit source]

See more about mechanics in the article: Callings

Abilities with the higher level replace their weaker counterparts.

Low levels of Calling do not affect the appearance of characters

Fifth level will change the appearance of the character, covering all the body with glowing runes.

After the Awakening, runes multiply and become brighter. Architect's pupils will turn white.

This article is a stub. You can help Elteria Adventures Wiki by expanding it.